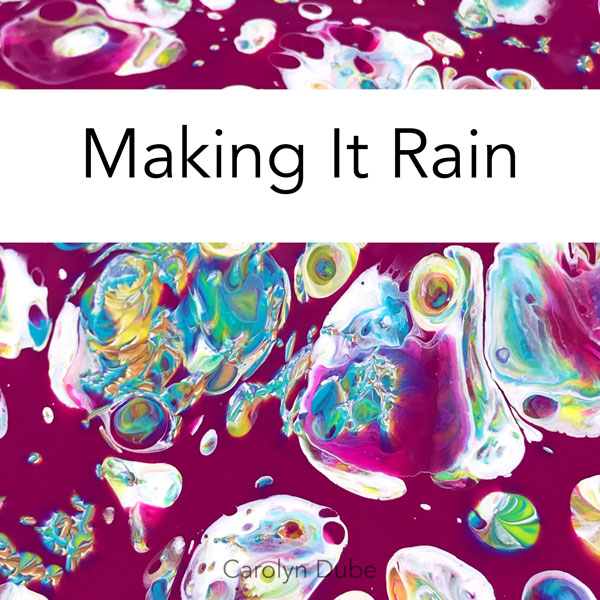 We’re working on a canvas here, but to understand what is going on, let’s imagine we are Greek gods in control of the elements of nature. We’re sitting up on Mt. Olympus and we dump huge, giant buckets of water on a lake that was perfectly calm and still.  The impact of all the drops of water will churn up the water that had been calm in the lake.  It will take it a bit to settle down, there will be water movement. That is what is happening on a very small scale when we drop the paint on there and is one of the factors as to why the paint moves and spreads for a time.

Take a small plastic cup and poke several holes in the bottom.  The more holes, the faster it goes, the fewer holes the longer it takes.

Put duct tape on the bottom of the cup over the holes.  This will hold the paint in while you fill the cup confetti style.

Add a generous layer of solid colored paint on the canvas.

Remove duct tape and hold cup over canvas so that it rains beautiful droplets of color.

Put as many or as few as you want the canvas.

After it sits for a few minutes, double check for any bare spots.  Fill in any that appear.

Get your cup ready by poking a few holes in the bottom.  Do one or ten- there is no right or wrong number. I tend to do about 5 because that is a level of dripping that lets me get lots of drips but not too fast so I can control it. 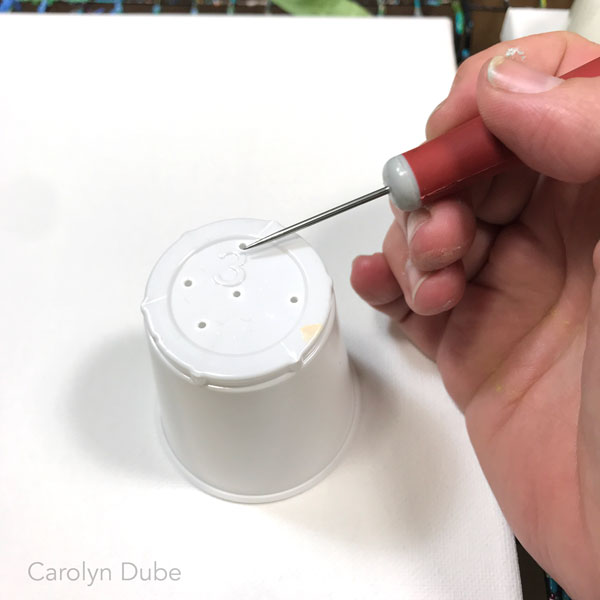 Cover the bottom of the cup with a piece of tape, so that when you fill the cup it won’t start leaking out the bottom until you’re ready. 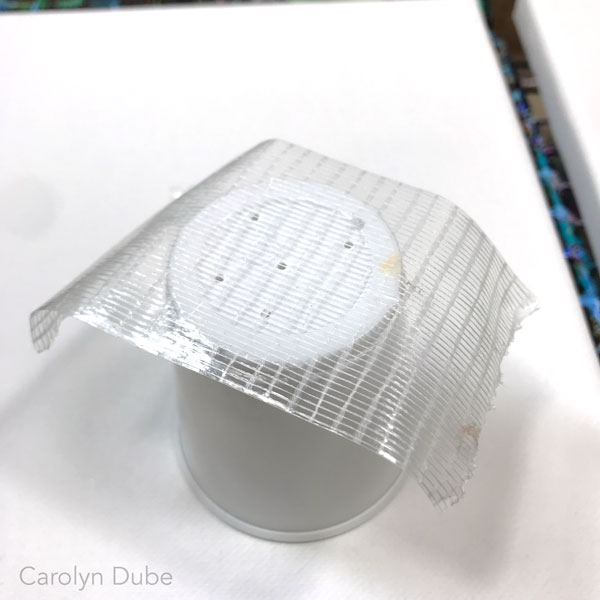 What color you put on the background changes how the paint looks. I’m doing a darker and a lighter background side by side, so you can see the impact the background makes on what colors pop in the drops. 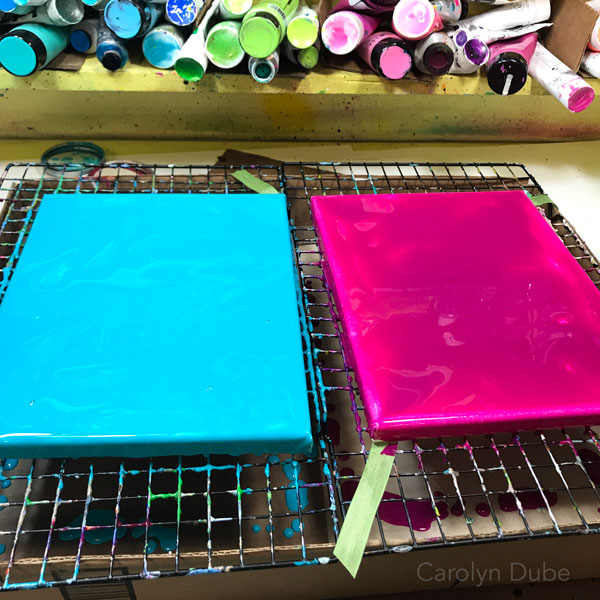 Now get your rain cup ready by adding the colors. I used DecoArt colors, with silicone mixed in the white.  This is more than enough for 2 canvases, so if you’re doing only one, then you only need about half a cup of paint. 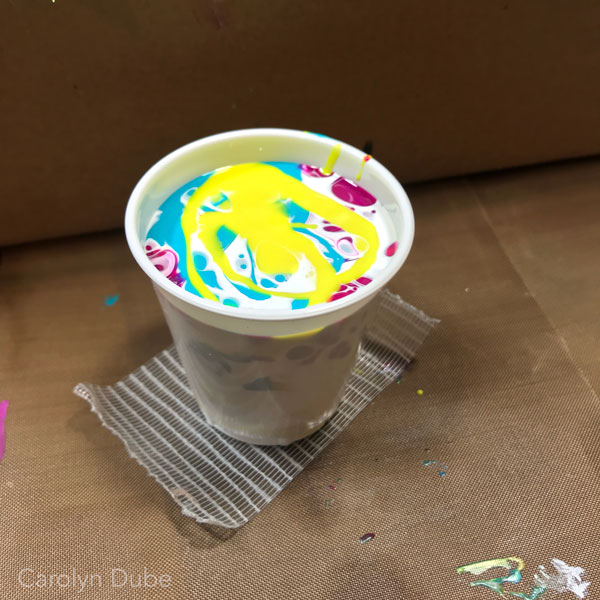 Peel the tape off the cup, and as the video shows, it is much easier to do that without a glove on.  Then hold it up and let the color drip on the canvas.

The big question is how much do you make it rain?  Do you fill the entire canvas or spread them out.  I left some space between them because it tends to move quite a bit as it dries. 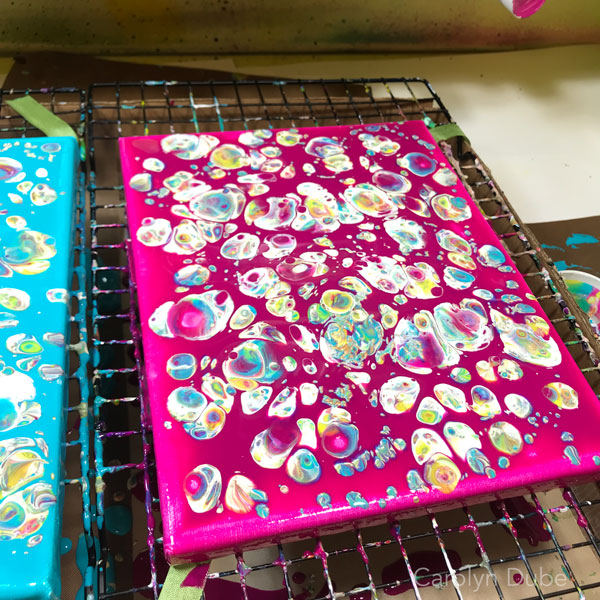 Could you put the drops of paint closer together and fill in the canvas more than I did? Absolutely! 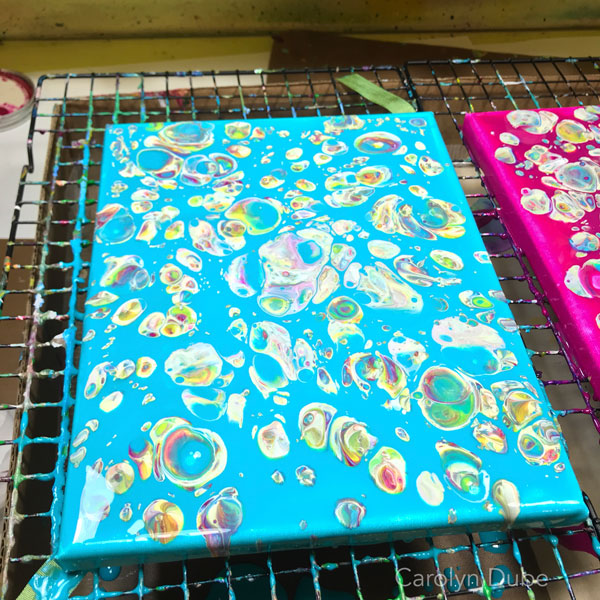 After about 10-15 minutes, I check for any bald spots in the paint and add just a touch more paint in those areas. 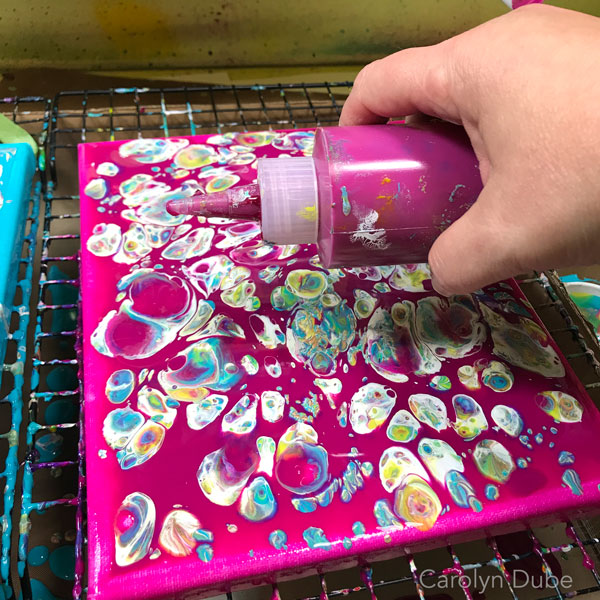 Early on there was lots of space between each drop, but as it dried they spread.  Why did they spread? 3 reasons, 1 my canvas wasn’t perfectly level and 2 I had a lot of base coat paint on there, and 3 that paint was very fluid or runny so it didn’t take much nudging for it to run. If you don’t want that much spreading of the cells, then use a thicker batch of paint on the bottom and keep an eye on the level canvas thing. 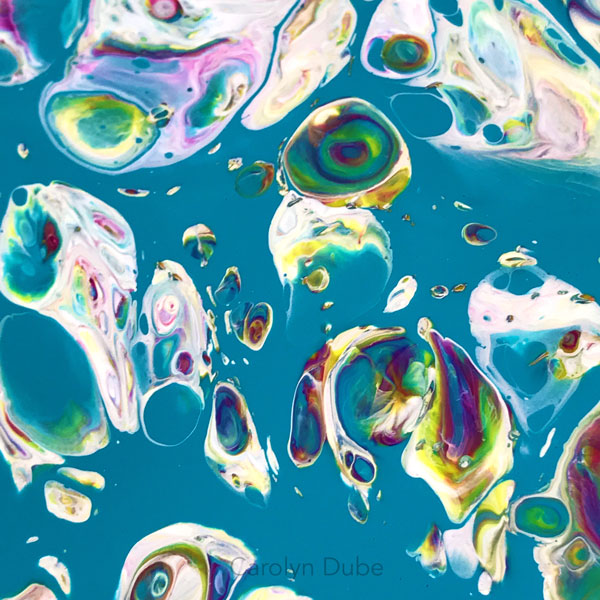 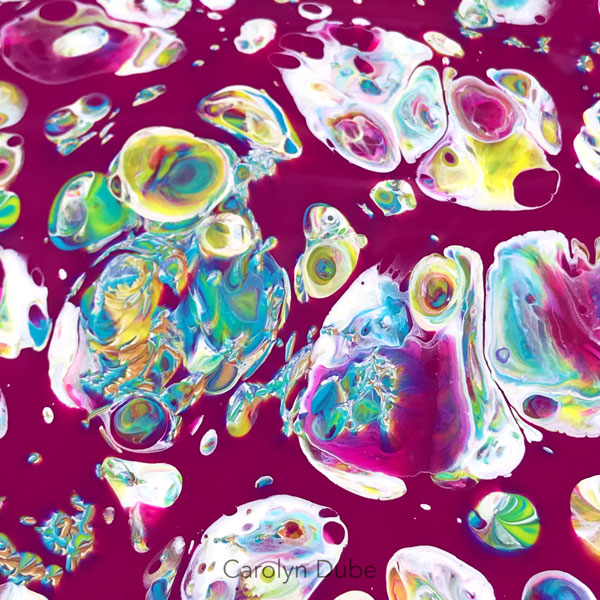 Let’s do a variation on this by creating a different look. Using DecoArt Pouring Medium, start with 3 puddles of color that are not touching each other and then load up the canvas with colorful rain.

7 holes in the cup, and you can vary the number of holes to get differnet looks. The more holes, the faster the paint comes out.

In the cup, just one frenemy, blue, and I have it insulated pretty well with white.  Will that lead to mud? Will it darken the colors?

Once the canvas has lots of paint, add more blue along the edges.  Then tip and tilt to see what happens. I wanted the blue to be longer, to go deeper into the other colors so by adding a lot of the runny paint there, when I tipped it, it ran faster than the other paint which is a little thicker.

Where I wanted a blue streak, I worked it and worked it, but it ended up going muddy so I left that alone after that but

If you’re not in love with the canvas yet, add more color to it, tip it, add more.